Hi! My name is Steph and my husband’s name is Dave. As Cooper’s parents our only hesitation in creating the Cooper Robertson Foundation has been in sharing his story. Is it our story to tell? How much do we share? Does he want his story told? We always land in the same space, that the benefits far outweigh our fears. Everyone has a story. There is power within our stories. Our hope in sharing Cooper’s story, is that we can help foster inclusion, belonging and connection within our community. So it is with equal parts hesitation and excitement that we tell Cooper’s story. Thank you for following along. 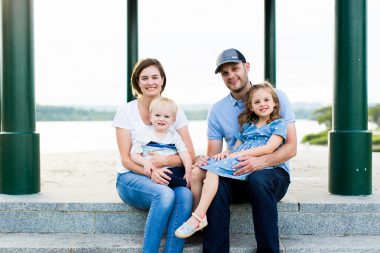 Cooper was born in September 2017. At Cooper’s 2 day check up, a heart murmur was found. Not to worry our doctor said. But when the murmur didn’t go away at 4 weeks old, off I drove on a Friday afternoon for an ultrasound of Cooper’s heart. I remember texting Dave around 5pm, after the ultrasound technician mentioned the cardiologist would be in soon to meet with me. Why? Why does the cardiologist need to meet with me to tell me Cooper’s heart murmur is innocent? Nothing to worry about. The cardiologist walked into the small room and then the conversation happened where all the words that would become a part of lives were first said. Heart rhabdomyomas. Tubers. Seizures. Delayed development. Tuberous Sclerosis Complex.

There was no way. These words did not belong to Cooper. He must be the small percentage of people with heart rhabdomyomas but not Tuberous Sclerosis Complex. Dave and I got to cling to this hope for exactly 14 days. Exactly 2 weeks after the cardiology appointment – on another Friday – Cooper started to make some odd movements with his arms and legs. His arms and legs would briefly extend out, in an almost repetitive motion. By the end of the day I was seeing more and more of these episodes, so we decided to bring Cooper to the emergency room. I remember being so emotional on the drive to the hospital. I think I knew deep down what was coming.

The emergency room doctor agreed that these movements looked like seizures. By this time, Cooper was making these movements every few minutes. He received a dose of Ativan and within seconds his little 6 week old body was heavy and calm, fast asleep in my arms. The rest is a bit of a blur. A CT scan was done. Tubers and nodules were found in his brain. And in that tiny little emergency room a diagnosis of Tuberous Sclerosis Complex was confirmed.

I remember saying to Dave, both of us in tears, Cooper still heavy in my arms… this is going to change our entire lives. I meant for the worse. But almost 2 years later and we’re starting to realize that may not be the case. 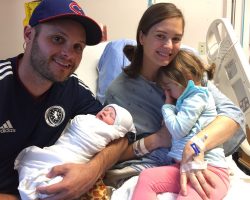 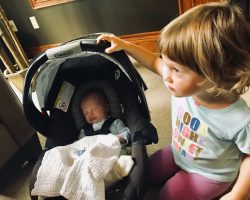 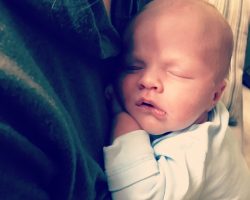 Cooper’s journey has been one of worst case scenarios. But also one of resilience.

We hoped his murmur was innocent, but heart rhabdomyomas were found. We hoped he was the small percentage of children with heart rhabdomyomas and not TSC, but he was diagnosed with TSC. We hoped he was the small percentage of children who do not develop seizures, but he was diagnosed with epilepsy. Even with the diagnosis of epilepsy, we hoped Cooper could avoid a specific type of seizure called infantile spasms which are often detrimental to development. At just 2.5 months Cooper was diagnosed with infantile spasms. We hoped Vigabatrin, often a successful drug for children with TSC and infantile spasms, would stop Cooper’s seizures. It worked for only 8 weeks before Cooper’s seizures were back. ACTH injections had to be the answer. Cooper suffered through weight gain, fluid retention, reflux and no sleep for 6 weeks. He was seizure free for 6 weeks. Keppra, Topomax, Clobazam, CBD oil. One of them had to be the answer. None of them were. At this point we had been trying to stop Cooper’s seizures for 10 months. He was now having more than 20 seizures every day.

A story of worst case scenarios. But also one of resilience. 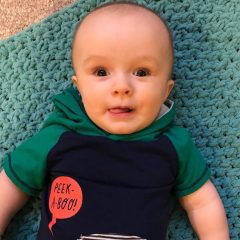 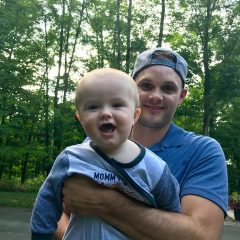 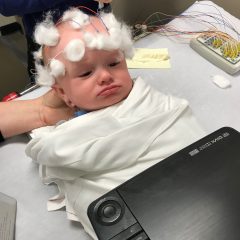 After both Vigabatrin and ACTH injections failed to stop Cooper’s seizures, the ketogenic diet was recommended by Cooper’s team at SickKids, in Toronto, Canada. Dave and I knew very little about the ketogenic diet for epilepsy. The first thing we learned was there was a wait list to start. We were given our start date – November 5 2018. I think we alternated between overly optimistic – this has to be answer for Cooper! To very skeptical – we’ve tried 7 different medications and a change in his diet is going to work? No way.

Interrupting these swinging emotions was a big decision that needed to be made. Cooper would be 13 months when he started the diet. He was still breastfeeding and because of the high dose of Topamax he was on, his appetite was quite reduced. He would need to drink 1 litre of water every day on the diet. He would also need to continue to take not only his medications, but also a long list of supplements to ensure his new restricted diet would meet his needs. A g-tube was discussed and we decided it gave Cooper the best chance to successfully start the diet. So on October 25, 2018 Cooper went into surgery to receive his g-tube.

Less than two weeks later we returned to SickKids to start the ketogenic diet. The diet – a high fat, low carbohydrate, controlled protein diet – was slowly introduced over three days. These three days also allowed us to learn about monitoring ketones and blood glucose levels and weighing food using a decimal scale. Cooper would now need to eat an exact amount of food at the same times each day. Cooper’s fat would come mainly from avocado oil each meal. His carbohydrates and protein from a range of foods including eggs, chicken, cheese, fruits and vegetables.

The diet was an adjustment for all of us. Cooper had to switch from breast feeding to a ketogenic formula. He had to adjust to different foods and a certain pressure to finish each meal in it’s entirety. He has experienced reflux and constipation. He has been hungry and irritable and has had to wait it out until his next meal time. We as parents have had to adjust to learning an entirely new diet. We have had to set aside more time for meal prep and have also felt the pressure to have Cooper consume all of his meals. We have had to learn to monitor blood glucose levels and track ketones throughout the day. We have learned to troubleshoot during times when Cooper is sick.

It’s been an adjustment. But it has been worth it. Cooper has not had a seizure since November 5 2018, the same day he started the diet. 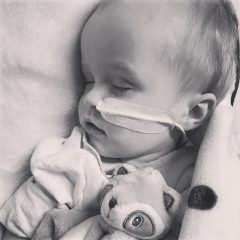 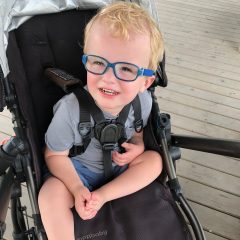 Cooper turns 2 on September 23 2019. That day in the cardiologist’s office, when we heard the term Tuberous Sclerosis Complex for the first time, seems simultaneously like yesterday and a lifetime ago. We have since learned, through genetics, that Cooper has a mutation in his TSC2 gene. Dave and I went through genetic testing as well, and it was determined that neither of us carry the mutated gene. Cooper’s diagnosis of TSC was the result of a spontaneous genetic mutation, that occurred for unknown reasons. Reasons we will never know.

Cooper has been on the ketogenic diet now for 10 months. When Cooper started the diet he was on two anti seizure medications – Vigabatrin and Topamax. We have been able to wean off both medications. Over these past 10 months we have got Cooper back. We used to see glimpses of Cooper, maybe a couple minutes here or there throughout the day. Since starting the ketogenic diet and weaning off medication, we now see Cooper all day. We will be forever thankful for these months and forever hopeful we get more.

Developmentally, Cooper is delayed. He sees a physiotherapist, occupational therapist and speech language pathologist. He has orthotics for his feet, a stander and a walker that we have been trialing. In the past 6-9 months, Cooper has started to sit independently. He has started the early stages of crawling. He will now weight bear through his legs. With help, he is starting to take some steps in his walker. Cooper babbles and has also started to learn some early sign language. He smiles and giggles and most importantly, Cooper seems happy and engaged.

This has been one of the more interesting parts of our journey. The pull of such opposing emotions. We are heartbroken for Cooper and the challenges he will continue to face. And yet at the same time, we are thrilled with the progress he has been able to make. The future is unknown and that can feel overwhelming. And yet, there is a certain freedom in letting go of all expectations.

In the past 2 years, we have been forced to accept that we alone cannot control Cooper’s path. This is both painful and freeing at the same time. What we do know is that we will continue to do what we set out to do before we ever heard of Tuberous Sclerosis Complex – help Cooper make his story, the best story it can possibly be. 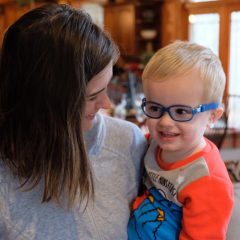 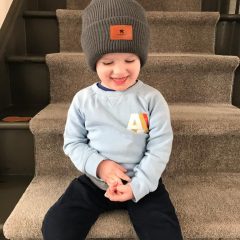 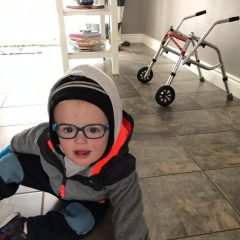 Cooper’s 2.5 year old motto seems to be slow and steady.

Cooper remains on the ketogenic diet, and this upcoming November will mark 2 years since starting the diet. Aside from some small changes, his diet has remained quite consistent. He continues to eat his food by mouth and receives all of his oil, water and supplements through the g-tube. We are so thankful for the g-tube, which allows Cooper to receive oil, 1500mL of water and 5-6 different supplements consistently every day. We continue to try to expand his food options, which can be a balancing act when you are also trying to make sure he eats everything you offer him. We recently found a pancake recipe that he loves, which makes for much more inclusive Saturday mornings.

Coops continues to crawl all over the place. He has picked up some speed and loves to show everyone how fast he can crawl. It is still amazing to see him be able to move about on his own terms. We are working really hard to give Cooper opportunities to practice walking. He tries walking using his walker, holding our hands and even with the support of a hula-hoop. It is so exciting to see him up on his feet, but walking still seems so far away. We try to remind ourselves that crawling also seemed impossible for the longest time, until it wasn’t.

It has been neat to see Cooper start to understand more and try to communicate with us. He definitely knows what he wants and isn’t afraid to let us know. He has a number of words now (his versions of mama, dada, Avery, bubbles, ball, popsicle, more, etc) which has opened up a entirely new world for him. It has been especially fun to watch him and Avery start to interact more and more.

And then there is just Coops. Not Cooper with a diagnosis of TSC, but just our little guy who has really started to come into his own over this last year. Coops who loves his sister and thinks everything she does is absolutely hilarious. Who loves Elmo and whose favourite food is jello. Who has learned what ‘hug’ means and is practicing with all his stuffed animals. Who asks to call his Grandma and Papa everyday, and is so excited to show them how he “stands up,” which really just looks like a wonky version of downward dog. And whose little smile, one we thought we had lost for good so many times, just reminds you of all the things you have to be thankful for.

Thanks as always, for following along with Cooper’s story and for supporting the Cooper Robertson Foundation. Your support in turn supports so many families just like ours who are impacted by TSC.